You may have noticed over the last weekend if you were strolling down by the Liffey that the towering edifice of Liberty Hall has gotten a bit of a make-over.

Draped over the different sides of the building are graphic representations of the build-up to the Rising, the action of the Rising itself and its aftermath. A number of the panels are based on the artwork of the renowned Irish artist Robert Ballagh and they have been erected by the SIPTU Trade Union.

Depicted on the various panels are images of the Citizen Army mustering at the old Liberty Hall ahead of the Rising, a depiction of the famous Starry Plough flag, a penal showing an injured James Connolly in the GPO and another of his execution in Kilmainham Gaol. Other images shown include the women of the ICA, a copy of the Proclamation of the Irish Republic and also the site of the Rebels imprisonment in Frongoch in North Wales.

A similar, visually impressive set of banners were displayed on the building to commemorate the 1913 Lock-out and it’s great to see such towering artistry in the city again for the 1916 Commemorations. 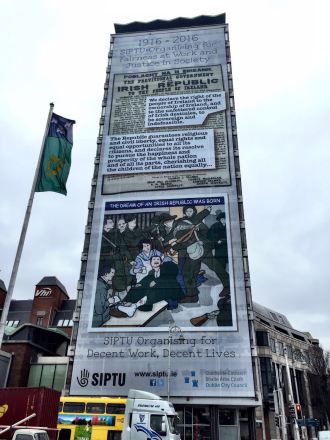 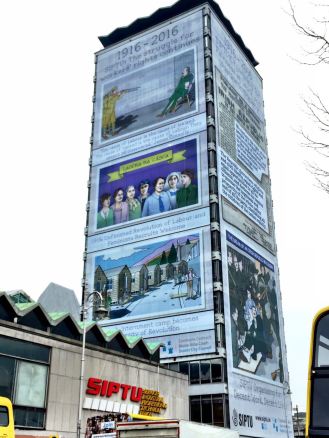 Originally published on DublinTown in March 2016